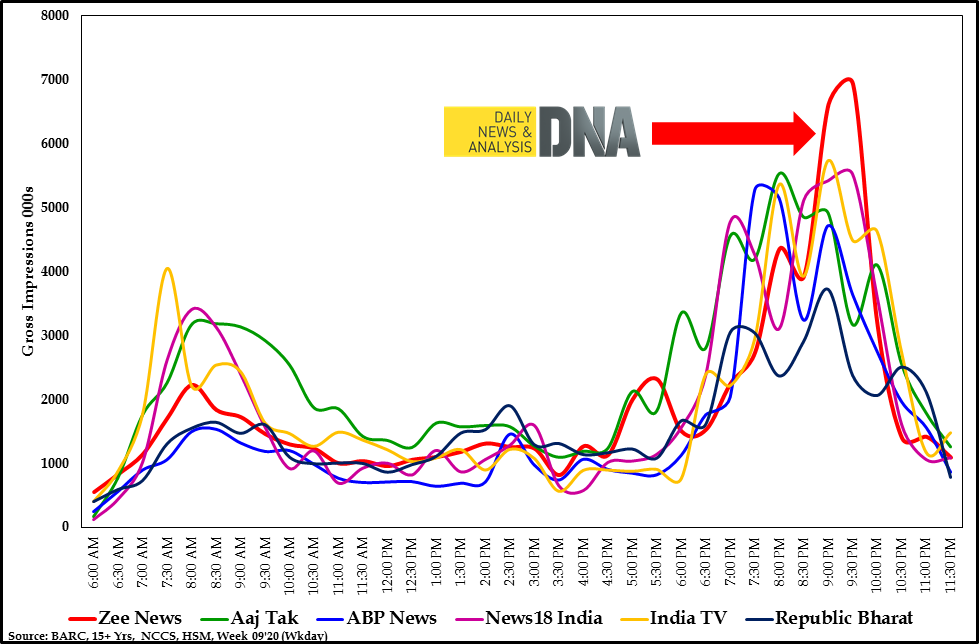 
New Delhi: Daily News And Analysis (DNA), the prime time show by Zee News Editor-in-Chief Sudhir Chaudhary, has earned the distinction of becoming the world’s top news show. The prime time show, which is broadcast from Monday to Saturday between 9 pm and 10:30 pm on Zee News and is now India Number 1 news show for 250 weeks in a row.

Among more than 400 news channels in different languages ​​in India, DNA alone is watched by crores every night. The world’s Number 1 news show DNA is watched by about 180 million people, according to the ratings of March 2019 to February 2020.

The most famous American news show, Hannity, gets merely 3.3 million viewers every night on an average, while Tucker Carlson Tonight, which is number two show, enjoys the viewership of only 3.1 million.

The Rachel Maddow Show, which is the third most popular show, retains its position with about 27 lakh viewers. Notably, DNA is watched by over 2 to 3 times more viewers than these popular global shows.

DNA has emerged as the undisputed leader in the Hindi News genre, is watched by about 5 crore viewers every month, and 2 crores watch it every week. The highly popular news show has earned its global recognition due to its accurate, unbiased and in-depth reporting of issues.

India’s number 1 news show in the world has consistently set new standards in Hindi news journalism with its thought-provoking reportage. World’s No. 1 news show has touched several milestones and aims to strengthen the credibility and trust through its fast-paced reporting and news coverage.